Automats of the past = trend of the future?

Rising to the Occasion

Automats of the past = trend of the future?

One NYC restauranteur is looking to bring automats — where customers can order and get food without interacting with anyone — back into fashion with a new dumpling shop that’s set to debut in the East Village in July.

Brooklyn Dumpling Shop, located at the corner of First Avenue and St. Marks Place, will have both metal detectors scanning customers’ temperatures and glass lockers with food that open just by scanning a smartphone, according to the New York Post, which first reported on the details of the planned fast food restaurant. Owner Stratis Morfogen, founder of the splashy Chinese restaurant Philippe Chow, and FiDi’s Asian steakhouse Brooklyn Chop House, started working on the plan after the pandemic hit, he says.

“I think the temperature guns are so intrusive and primitive,” he tells Eater of his decision to instead use metal detectors. He is also betting that automat-style dining might be the way to go for fast food restaurants in the future.

For the temperature scanners, Morfogen repurposed some metal detectors from nightclubs that he used to own and has installed temperature sensors in them. Customers entering the shop first pass through this sensor, which flashes red if someone’s temperature measures above 99.6 degrees F, and green if not, Morfogen tells Eater.

If the detector flashes red, customers are ushered by a staffer to wall panel that detects temperature when a diner holds up their wrist to it. If this too indicates a high temperature, customers will be asked to leave the shop.

As for ordering food, customers will be able to do so on their phone or through an ordering kiosk nestled among the nearly ceiling-high row of food dispensers. Diners won’t have to touch the pad; instead they can hover their fingers on the panel to make selection and to pay with a credit card, Morfogen says. 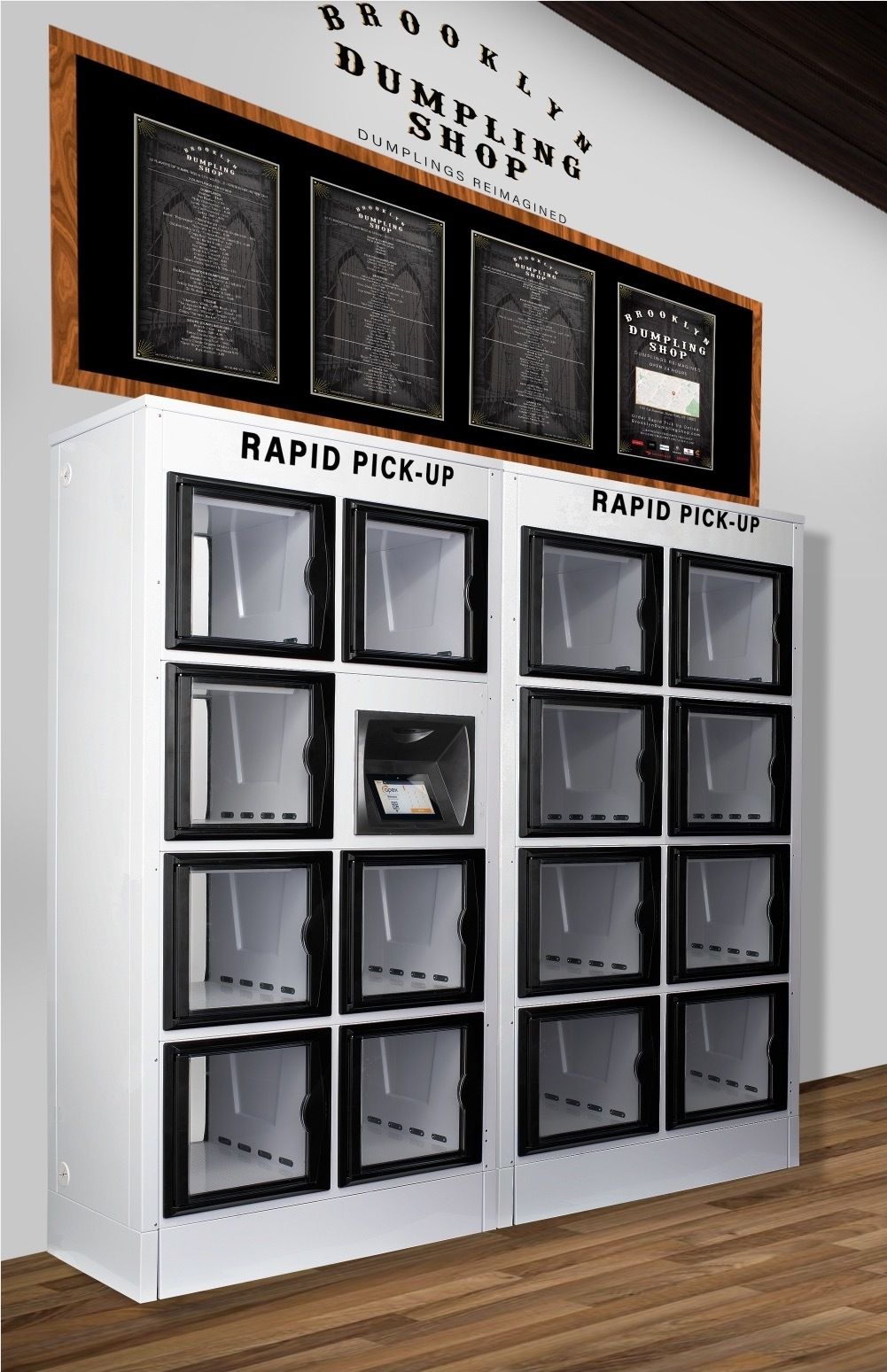 The stack of lockers — reminiscent of the Horn and Hardart automats that were a ubiquitous presence in NYC in the mid-20th century — flash red when an order is placed, yellow when the order is two minutes from coming out, and green when it’s ready to be picked up. Diners continue to receive text updates throughout and scan their phone on their locker when it’s ready to be picked up. Only two customers will be allowed in the restaurant at a time.

The menu leans fusion, with fillings like pastrami, bacon cheeseburger, lamb gyro, along with a handful of spring rolls that come in options like lobster ginger garlic and Peking duck. The dumpling shop will be open 24/7 and offer 32 different kinds of dumplings.

It’s not the first time a restaurant has tried to repopularize automats, which declined in popularity in the 1970s and 80s with the rise of fast food chains like McDonalds and Burger King. Bamn! Automat tried in 2009, but only managed to survive three years. More recently, SF-based quinoa chain Eatsa tried expanding in New York but closed both locations in less than a year after saying it expanded too fast.

Still, Morfogen insists the time for automats is now. The restaurateur says that Horn and Hardart exploded in popularity in New York after the 1918 Spanish flu, and he expects cautious New Yorkers will similarly take to his dumpling shop.

“With fast food, people already know what they want and there’s no need to engage with anyone,” Morfogen tells Eater. “I think this will be the model going forward.”

Rising to the Occasion